It’s December 2017 and Sarah and Jack have excitedly landed on ‘Walking to Donegal’ as the right name for this significant Doherty project.

I sat ready with a pen and paper and listened to these proud clan members share their dreams and realities about being Doherty, about why they needed to share this treasure and about who with. I remember thinking ‘these talkers need a writer, so it’s just as well I am here!’

I glanced at the headlines I had scribbled on my paper – goals, objectives, milestones, risks, communications – the why, what, who, and how of project management. However, their talk was typical Doherty speak. It was punctuated with frequent new ideas, loud hoots of laughter and words like ‘why not? who else? or what else?’ Their risk strategy included phrases like ‘ of course we can’ or the simple explanation that covered everything else:

I had heard the vision being espoused by Jack since his life-changing trip to Ireland in 1993 so I was more than familiar with the content and purpose. Our time in Ireland with Sarah in 2012 meant the two of them were now fully engaged so where they would land was wildly unpredictable.

On the same afternoon, thinking of other types of yarns in our lives, Sarah and I wondered about whether ‘Walking to Donegal’ could literally, as well as figuratively, become  ‘weaving a Donegal tweed, stitching a fine garment in Donegal tartan or knitting a jersey in Doherty cables’ 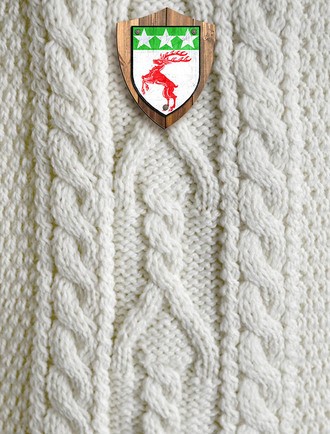 As the afternoon ended, a glass of wine was poured to toast the official ‘Walking to Donegal’ title. Jack knocked his glass over on the floor mat and grabbed a kitchen towel to march on and soak up the liquid. When we noticed the towel was a map of Ireland, we shrieked with laughter realising he was indeed ‘walking to Donegal’. It was a symbolic and memorable beginning.

3. The Tale of Two Brothers

7. The Wrights and the Dohertys – My Family Story

A day out in Donegal